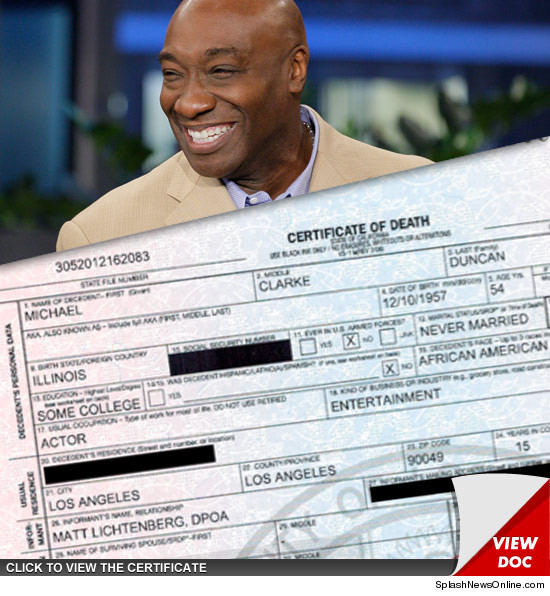 UnsungHipHop.com - Michael Clarke Duncan died from respiratory failure, weeks after going into cardiac arrest ... this according to the actor's death certificate.  According to the doc, obtained by TMZ, respiratory failure is listed as the immediate cause of death.  One of the underlying causes of Michael's death was anoxic encephalopathy (severe lack of oxygen to the brain). As we first reported, MCD's organs were severely damaged during the minutes following his initial cardiac episode on July 13th, when the actor went without oxygen for five whole minutes.  Other underlying causes include ventricular fibrillation (irregular quivering heartbeat), and acute myocardial infarction (heart attack).  Organ nodules (sarcoidosis) were a contributing factor to MCD's death. Two weeks after he went into cardiac arrest, MCD also received a tracheotomy, presumably to aid in breathing.  What I don't understand if he was supposed to have died a couple weeks after his respiratory failure.  Why are they just reporting his death now ? Something is not right with this story.  You guys tell me what ya'll think... @unsunghiphop