Cree Summer Talks Natural Hair And Being A Mother

Cree Summer, one of the original natural hair idols, is On The Couch! And being the big kid that I am, I must say that it was pretty damn cool speaking with the woman behind Susie Carmichael, *whispers loudly* the only Brown Rugrat. Her voice has breathed life into countless cartoon characters, but many remember her as the cute and quirky Freddie, from 'A Different World'. During the interview she dished about her new baby girl, Brave, the resulting 'Mom Bun', and revealed that despite making a positive impact and being identified by her curly hair on 'A Different World', she wasn't really feeling it. Checkout the interview below.


CurlyNikki:Tell us your hair story!

Cree: It’s so funny, I’ve never thought about my hair story. As a girl, it was probably the bane of my existence. I went to a predominately white school… it was just myself and one other African-Canadian boy. I hated my hair. I wanted it to be straight and I wanted it to be blond. I remember one pitiful attempt to have bangs. I would use lots of hair spray and hold them down with a rag. I remember going to school and the bangs slowly rising until they looked like an awning or a visor. I was mortified! The journey went on like that for years and years.

Believe it or not, on 'A Different World', I was very unhappy with my hair. People don’t know that. That was not a happy hair time for me but I’m happy that people were inspired by it though. Debbie Allen had taken my hair and dyed it red and they used to curl it with a curling iron, and it wasn’t until I left 'A Different World' at 23, that I learned how to do my hair and fell in love with it.

I’ve always been natural and had never done anything to it besides dye it. I was on a television show called 'Sweet Justice' where it became blond for a while and then a show called 'Courthouse' where I wore it jet black. It’s always been curly and when I started making records and touring with my music, I started loving my hair. It really became an identity… something for me to hide behind when I was insecure, and to show off when I felt confident. But now I’m in a different stage, I’m in my 40's, I’m a mother and it’s in a bun. I call it the Mom Bun. Are you familiar?!

CN: Girl, yes. I used to style my hair every other day... now I go weeks between washes. I just don't have the time.

Cree: Right, you don’t have time, and you can’t wear it down because little hands are going to pull it. It’s been in what I call the Mom Bun for the last 9 months! I’d love to wear it down again, I miss it, I miss it a lot, it’s apart of my sexuality among other things, and I know I’ll get back there, but right now, it’s just back in the 'Mom Bun'. 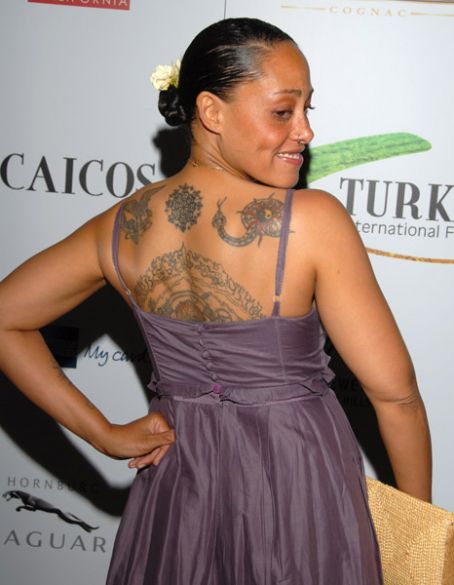 she notes, 'this is not a pic of the 'Mom Bun'. This is 'Single Bun'. [Laughter] This one is organized and purposeful. The 'Mom Bun' is higher and messier!'

CN: I’ve done the ‘Mom Bun’, I’ve rocked hippy chic with twists and cute tams, and most recently, I’ve adopted Shanti’s Retro French twist. You must try it! I'll send you the tutorial.

Cree: I like the sound of that already. Please email that to me right away... I'm sure my man will thank you too!
CN: So how do you achieve your Mom Bun?

Cree:I get the tangles out in the shower with Kerasilk conditioner. I love that conditioner, it gets through the tangles in no time. I then put in a leave-in conditioner from Whole Foods- Giovanni Direct Leave-in. If I have 5 extra minutes, I'll comb through it and make it a nice, neat bun, if not, I just leave it curly, pull it back and put an elastic on it and take two pieces and twist them for frill. It’s really raggedy, I must admit!
CN: It sounds cute though… Mom Chic?

Cree: Mom chic, yes let’s call it that to make ourselves feel better!
CN: When you have the time to wear it out and curly, what does your routine look like?

Cree: I get in the shower, I put the Kerasilk in, I comb it through gently, put in the leave-in and usually follow up with a gel product, like FX Special Effects Curls Up. I scrunch up my hair in the shower, then I put it in a quick dry towel, take that towel off and put it in another quick dry towel and leave that on for maybe 20 minutes. Finally, I take it down and I don’t touch it until it’s dry. Even if I’m walking around looking like 1990's Michael, I just leave it…don’t touch it! Then, once it’s dry, I’ll shake it out to achieve volume. It’s really all about letting it air dry or otherwise the curls will get funky or frizzy.

CN: Do you use your fingers or a comb?

Cree: A wide tooth comb. Which was, I’m sure you can relate, a major discovery in my 20s. It was like the clouds parted and the wide tooth comb came down. And I was like ‘yes, I can get through these tangles!’. I remember sitting there with my mother detangling my hair and it was really just torture. My mother put my hair in two braids until I was 15. I still rock 2 braids, even though I look like some old lady in Forever 21 clothes… I still rock it. I can’t wait until my daughter is older so I can put two little braids in her hair!
CN: What about your daughter’s hair? Is she a fellow curly?!

Cree: It’s actually very straight and very blond! My father has blue eyes, blond hair and my mother is very dark skinned. My husband is not mixed, and he’s maybe a shade or two darker than I am. And here comes my very fair skinned, straight haired, gray eyed daughter! If my daughter didn’t look like him, I’d have a lot of explaining to do! It’s still early, and it looks like it’s starting to get a curl to it, but for the most part, it’s very light and very straight.

CN: Any advice for the future curly moms out there?

Cree: I wouldn't want to give advice to new mothers, but I would love to share the importance of knowing your rights in childbirth and to research your childbirth options. Women spend more time researching a new car than their births and I would also suggest if they are interested, to check out, 'The Business of Being Born', a documentary produced by Ricki Lake. I had my daughter, Brave LittleWing at home and it was a safe, deep and magical experience .

CN: Tell us about your current and upcoming projects...

Cree: I am now working on 'Robot Monster', a new cartoon, and the new 'Bat Man' series for Warner Bros. I'm also in a new Disney cartoon/musical with Mandy Moore called 'Oki' s Oasis'. In that, I play a vain pig, the nerve [laughter], named Penelope Pig. I am also on an MTV show currently running called 'Good Vibes' and always guesting on many cartoons. I am very blessed in the world of Voice Over. It is an amazing job that children really love so it keeps me young too. I have just begun preproduction on a new album! It's been a long time coming and I am so excited. But the most important job in my life now, is being Brave's Mother and a good partner to my love Angelo."

Courtesy Of CN
Posted by Unknown