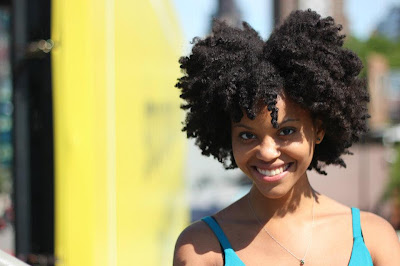 When did you decide to go natural? Why? Did you big chop or transition?
I was inspired to go natural by my friend Jamila of College Curlies - she had started blogging and turned me onto all the information out there, so I got really curious. I was in love with all of the curly styles and the ability to do my hair myself was really appealing. I started transitioning my freshman year of college. My last relaxer was at the end of February 2010, and I cut it almost a year later at the beginning of February '11. My big chop story was on CurlyNikki! Way more detail in that post. 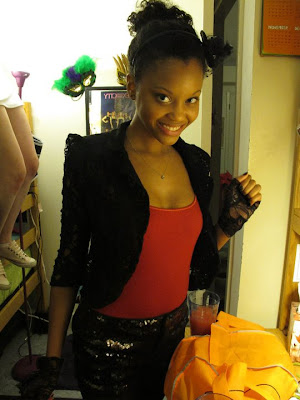 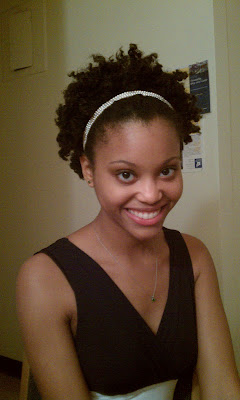 Right after I bc'ed; February '11
What is your current regimen?
Lately I style every week, sometimes every two. For a while I washed with Jane Carter's Hydrating Invigorating Shampoo and conditioned with Aubrey Organics Honeysuckle Rose, which I love. Since I've been home for the summer I've been using my little sister's stuff, which is Nature's Gate Henna shampoo and conditioner - both great. I also picked up some Suave Professionals Almond and Shea Butter conditioner and I really like it so far, especially because it's so cheap. I detangle with conditioner (just got a shower mirror so I don't have to get out to do it, yay!) and a wide-toothed comb, and then style with Shea Moisture Curl Enhancing Smoothie, and seal my ends with Trader Joe's coconut oil. A medium sized braid out was my go-to for the last six months, but I've recently returned to chunky twists and I'm loving that. I re-twist with a little spritz of water and some more product if I need it (in front of Cosby Show and Living Single re-runs, very important part of my regimen). My routine is pretty simple (read: I'm pretty lazy). 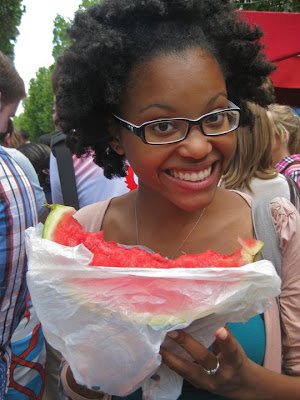 Braid out at the Tour de France last summer in Paris! Clearly I'm more excited about the watermelon than the bicycles.

Describe your hair-
I haven't bothered to type it really, but it's coily in the front/top and gets tighter and you move out, until its frizzier on the low sides/back. My hair is super thick but I need to work on length retention - it can get really dry and I tend to get single strand knots. I need to deep condition more!

What do you love about your natural hair?
I love that I'm in charge of it - when I was relaxed, I never felt like my hair was "done" unless I went to the salon. It's really nice to be able to do it myself. And I can't lie, I like the attention I get when I go out! It's fun when people notice your hair and ask questions about it. I've been doing all my yearly doctor's appointments and I think I've encouraged a few nurses and medical assistants to try wearing their hair natural. 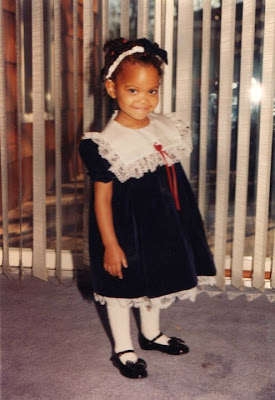 Rocking some twists back in my pre-relaxed days

What have you learned throughout your journey? Advice for others?
Going natural was definitely an exercise in going for it. Before I bc'ed, I was really nervous because I auditioned for commercials and things in New York - I was worried that I wouldn't be as successful with shorter hair. But it worked out great, especially because natural hair is huge in advertising right now. I did a Subway commercial that aired in New York earlier this year and just shot one for Joe's Crab Shack that should be out in the fall. For me going natural is also about accepting what you have. While transitioning, I spent so much time on blogs and on YouTube obsessing over other women's textures and how I could get mine to look like theirs. I also hear a lot of women tell me that my hair is pretty, but that they couldn't go natural themselves. That comment drives me crazy! The way your hair grows out of your head is perfect. 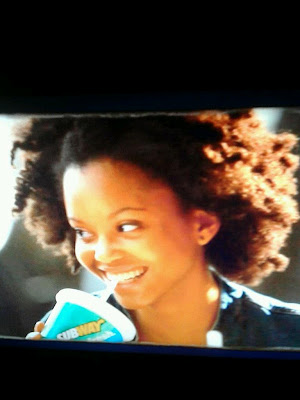 Anything else you'd like to share?!
I just graduated a year early from New York University with a BS in Communicative Sciences and Disorders, and I got a full ride to do my Masters in Speech Language Pathology at the University of North Carolina at Chapel Hill medical school! I was also accepted into UNC's lactation consultant certification program through the school of public health, so I'll be doing that as well. I'm so, so excited to be a Tarheel come August! My goal is to practice in a pediatric hospital - I'd love to work in the NICU as a feeding specialist (SLP's also cover swallowing disorders). Any fellow natural SLPeeps out there? It's also really important to me to use my lactation consultant certification to promote breastfeeding in the African American community, particularly among teen moms. (Nikki, thanks for helping to spread positivity about breastfeeding by talking about it on your blog!) 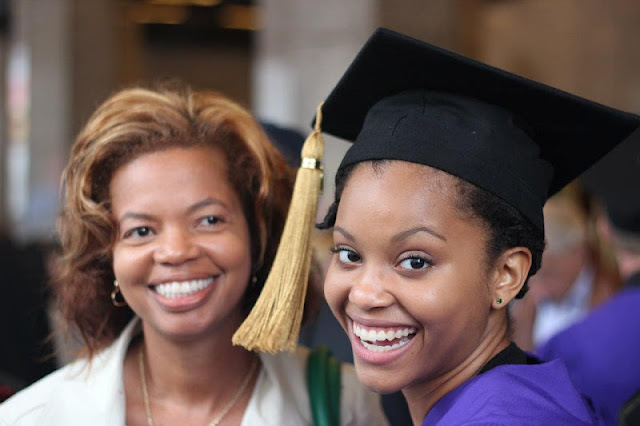 NYU graduation! I pinned my twists up under my cap and took them out in the front seat of the taxi on our way to lunch. With my mom, who's also natural.

Courtesy Of CurlyNikki
Posted by Unknown