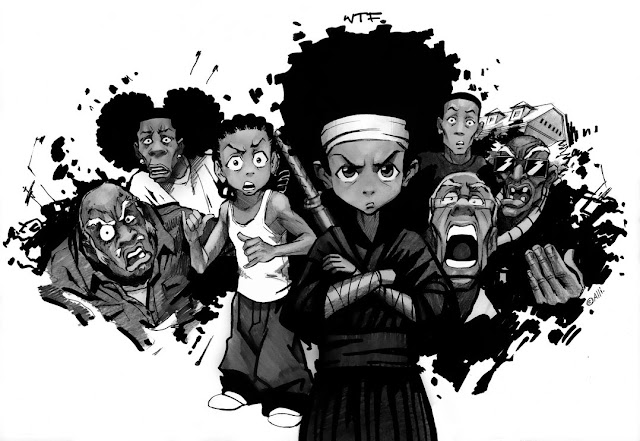 There are few things loved more on television than the hit TV show, “The Boondocks.”  The show achieved major landmarks in viewership and the iconic characters are quoted all over the place.  But it seems to have been ages since the show last released a new episode, and viewers are getting antsy.   The first episode aired eight years ago, and the show has only produced three seasons since that time.
The Boondocks has faced possible legal action from those that it has challenged, including BET and Tyler Perry. The show’s insinuation that Perry was secretly gay led to a strong backlash from the filmmaker and outrage from some of his fans.  The BET-centered episode, called “The Uncle Ruckus Reality Show,” featured BET as a pathetic, destructive network that fed off increased ignorance among the African American community.  They even implied that BET executives get upset whenever they hear about a black person learning how to read.
The new season in 2014 features 20 episodes, to the delight of the show’s hardcore fans.  The popular show started as a comic strip in “The Diamondback,” the student newspaper at The University of Maryland.
Ironically, the show was actually taken to the airwaves initially in a partnership between creator Aaron McGruder and former BET president, Reginald Hudlin.  The deal fell through with the Fox network, who found it difficult to make the show suitable for television.  This is strange, since Fox already distributes the shows, Family Guy, American Dad and The Cleveland Show, all of which are just as controversial as The Boondocks.
After the deal with Fox fell through, Hudlin left the project, which might be why McGruder makes fun of him during his BET episode.  But for contractual reasons, the show must give Hudlin credit for being an executive producer for the show.  We’re not sure how he feels about McGruder’s decision to bash BET.
To feed your nostalgia, here’s a clip from a classic Boondocks episode.  This season has been years in the making, so it should be a good one.