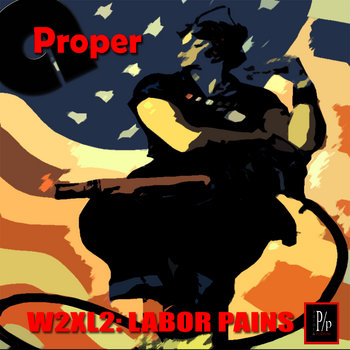 Waiting to Excel Pt. 2: Labor Pains is the second offering from Proper of Pride & Purpose in the “Excellence” series. It is the semi-autobiographical story of a man staying true to himself while achieving his goals. As kind to everyone in life, Proper navigates his way through proverbial potholes and wrong turns on the road to success, all while maintaining a balance in his relationships with his friends, family, spouse, and most importantly himself.

Proper delves deeper in the theory of chasing dreams as an individual while existing in mainstream society. He follows the path of creating opportunities as a dreamer while enjoying the spoils and experiencing the toils of laboring for Corporate America. A theory he has coined as “Labor vs. Work.” Proper portrays a persona in Corporate America that is matter of fact, succinct, and even keeled. This persona is offered with effort on his part while repressing the attributes he learned growing up in Richmond, CA, a city that preys on the meek in place of prayer during hard times.

While adapting to this commercial environment, and with the support of his other half, Proper maintains his focus on excellence, using his dreams to propel him through reality.